Mary resides in Northern California where she divides her time between surfing, making art, and playing ukulele, while also trying to keep up with the quotidian aspects of life.

Although she has a degree in the Arts, and worked as an advertising art director for many years, Mary’s independent nature and a need to approach creativity on her own terms has led to her being entirely self taught in fine art.

Having explored several different paths as a visual artist, it was when she returned to surfing 18 years ago that her interest in water, and trying to understand it, was born.

Attentive curiosity, a distractible mind and a desire to see things "as they are" along with a lifelong interest in Mindfulness practice, have influenced her art. She is still learning in all areas.

As a surfer, every time I am in or near the ocean, it fills me with an overwhelming sense of awe. Then comes the never-ending and almost impossible task of trying to convey that feeling with paint.

When I first began to paint water, I was trying to understand how light and movement affect the surface, whether still or moving. As time went on I became more interested in trying to capture those hypnotizing moments as I watched swell energy moving through the water or the quickly changing quality of light on the surface.

Because of my unique viewpoint as a surfer, “Morning Swell” really captures one of those moments for me. 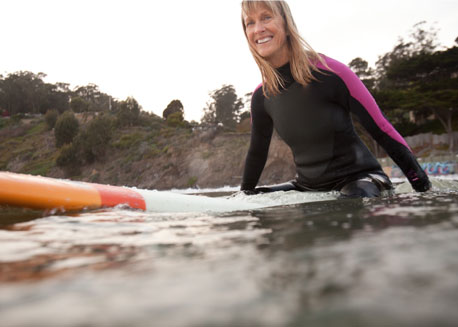